Pollution of water by diesel oil

Polluted water was analyzed using the HeadSpace/GCMS (HS/GCMS) coupling which allows us to focus on Ultra Volatile Organic Compounds.
It is possible via this analytical technique to volatilize very light compounds using the HS module, then separate them using the gas chromatography module and identify/quantify them using the MS detector. 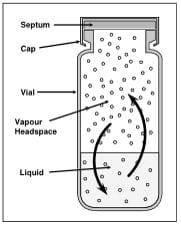 The sample is placed in a gas tight vial and hermetically sealed using a suitable septum.

The vial is placed in an oven at a defined temperature in order to generate a headspace (balance between the liquid / solid phase and the vapor phase). Then the injection needle will pressurize the interior of the vial using the carrier gas for a few minutes. Thanks to the action of a set of valves located upstream of the needle, the inlet of the carrier gas is in the closed position and the gaseous sample under pressure is injected into the chromatographic column under the effect of expansion. (pressure balance sampling). The valves are then reopened so as to introduce the carrier gas into the bottle, which has the effect of stopping the injection.

During the injection into the GC, all of the volatilized organic molecules will be separated by the chromatographic column and then identified by the MS detector (mass spectrometry). The area of the chromatographic peaks of each compound is proportional to their content in the sample.

This technique is recommended for samples:
- Liquids: Aqueous matrices, Oils, Emulsions, Gels…
- Solids: Polymers, Resins, Soils…
It is recommended for traces or majority constituents, for complex matrices, and allows not to incorporate solvent in the sample (without preparation).

The limits of quantification are particularly low for certain compounds (ie. 4 ppb for aliphatics ).

Other examples from industry